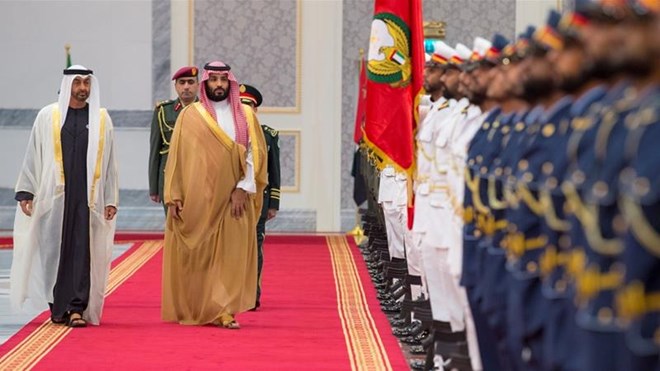 Riyadh and Abu Dhabi are putting their bets on Trump’s re-election to realise their vision for regional hegemony.

As the situation in the Middle East continues to escalate, with Iran and the US-Saudi axis trading accusations over sabotaged vessels in the Gulf, Qataris quietly marked two years of living under siege.

Although the land, sea and air blockade the United Arab Emirates (UAE), Saudi Arabia, Bahrain and Egypt imposed on Qatar in June 2017 has taken a backseat because of the Iranian crisis, the confrontation at its heart has by far not diminished.

Riyadh and Abu Dhabi continue lobbying against Doha on international platforms and are showing no sign of easing their economic siege. This became apparent once again at the three summits the Saudi king hosted in Mecca last month, to which Qatar was invited.

During the proceedings, Saudi Foreign Minister Ibrahim al-Assaf said a solution to the Gulf Cooperation Council (GCC) crisis would only be possible if Doha goes back to the “right path” – that is, if it heeds to the Saudi and Emirati regional agenda.

Despite having failed to subdue their neighbour thus far, both Abdu Dhabi and Riyadh seemingly believe that hostile measures can still yield the desired outcome. Their persistence with the blockade is part of their larger plan to establish regional hegemony in the long term. The success of their plan, however, is very much wedded to US President Donald Trump securing a second term.

Since June 2017, there have been several attempts to resolve the GCC crisis, with Kuwaiti Emir Sheikh Sabah Al Ahmad Al Sabah leading regional efforts, but no progress has been made to date.

Meanwhile, it is becoming increasingly clear that various power centres within the blockading quartet are growing disaffected with the current situation.

Dubai, for example, appears to be deeply frustrated with the prolongation of the crisis and the policies of its oil-rich neighbour, Abu Dhabi. The emirate, which built its success story on a liberal and open business model, is increasingly forced to choose politics over business.

Up until now, Dubai – not Doha – has been the biggest loser in the crisis. Many international firms which were managing their Qatar businesses from regional offices in Dubai had to relocate to Doha due to the blockade restrictions. The emirate’s logistics and trade sectors also took a hit, as Qatari companies which used to import goods through the Jebel Ali port had to reroute the supply roots through the Port of Salalah in Oman.

Last year, Dubai’s stock exchange saw its worst collapse since the 2008 financial crisis and this year it may not fare any better, especially as renewed US sanctions on Iran have caused it lose billions of dollars.

In Saudi Arabia, there has been growing concern over the leverage Abu Dhabi and its de facto ruler Mohamed bin Zayed (MBZ) have over the kingdom’s decision-making. His influence over Crown Prince Mohammed bin Salman (MBS) has worried some quarters and so has the aggressive behaviour of the young heir to the throne. In the aftermath of Jamal Khashoggi’s gruesome murder and the series of public reports linking the crime to the crown prince, Riyadh was forced to “clip his wings” and have King Salman take back a number of key portfolios.

In Bahrain, the GCC crisis has become one more factor in the game of thrones between the King Hamad bin Isa Al Khalifa and his uncle, Prime Minister Khalifa bin Salman Al Khalifa who has occupied this position since 1971.

Last month, the prime minister phoned Qatari Emir Tamim bin Hamad Al Thani on occasion of the holy month of Ramadan. This was the first direct high-level contact between an official from the Saudi-led bloc and Sheikh Tamim since September 2017. The initiative triggered a strong reaction from Riyadh and Abu Dhabi, prompting the Bahraini king to intervene and issue a statementreassuring his allies that his country is still committed to the “common position” on Qatar.

Just like the former Saudi Crown Prince Mohammed bin Nayef, the Bahraini prime minister is said to have opposed the blockade and the way it was imposed. Dissatisfied with his stance, MBZ reportedly sought to overthrow Khalifa in Bahrain and substitute him with one of the king’s young sons who is more in line with Abu Dhabi’s politics.

Despite the growing friction within the quartet, MBZ and MBS have managed to keep it united enough to continue pressuring Qatar. The blockade on their fellow GCC-member is a key part of their plan for regional hegemony.

So far it hasn’t been just Doha’s resilience that has thwarted their efforts to bring the GCC under their full control. It has also been the refusal of both Kuwait and Oman to join the blockade. Kuwait’s Sheikh Al Sabah and Oman’s Sultan Qaboos have stood their ground and refused to cave in to pressure. As a result, there are increasing signs that Abu Dhabi and Riyadh are seeking to influence the succession processes in both Gulf countries and ensure that the successors of the two ageing monarchs are more willing to join their alliance and follow their cue on GCC and regional politics.

At the same time, with the help of the Trump administration, MBZ and MBS are hoping to weaken the two other contenders for regional influence: Iran and Turkey. Both played an important role during the initial stages of the blockade on Qatar, with Ankara sending troops to help boost the security of the small Gulf country.

Iran is now the target of a relentless diplomatic onslaught by the Saudi-Emirati alliance, backed and encouraged by the US. The reimposition of the US sanctions has pushed the Iranian economy to the brink.

Meanwhile, Turkey is also experiencing growing political and economic difficulties. The Trump administration has recently escalated its pressure on Ankara over its purchase of the Russian S-400 missile system and threatened sanctions which have affected negatively the already faltering Turkish economy.

The Saudi-Emirati axis has also sought to influence events in Sudan, Libya, and Algeria, as dangerous upheaval has gripped all three countries over the past few months. It has attempted to undermine popular movements for freedom and democracy with the intention of replicating the notorious Egyptian military dictatorship model.

All these efforts are aimed at removing all obstacles to Saudi-Emirati regional hegemony and securing the following outcomes: Kuwait and Oman abandoning neutrality in the GCC crisis and falling in line with the axis; Turkey and Iran being contained and weakened; Sudan, Libya and Algeria seeing the consolidation of military regimes loyal to Riyadh and Abu Dhabi; and Qatar caving in to pressure and submitting to Saudi and Emirati domination, after being isolated and abandoned by allies.

The success of this plan largely depends on Trump being re-elected in 2020 and continuing the anti-Iran campaign, the pressure on Turkey and the support for Saudi and Emirati interests in the crises in North Africa. MBZ and MBS hope that another four years of Trump in the White House would give them enough time to reshape the regional geopolitical landscape in their own favour.

But according to the latest polls in the US, a Trump re-election is far from certain. And even the incumbent comes back for another term, that still does not guarantee that the Saudi-Emirati plan would work.

The Middle East is a complicated and unpredictable region. In its history, there are many examples of how the efforts of regressive and counter-revolutionary forces have backfired. There are also many variables in the region which Riyadh and Abu Dhabi would find hard to control or even influence.

MBZ and MBS may appear to be on the offensive, but in reality, they are on the defensive. Their plan perfectly illustrates the many insecurities the two regimes harbour and their desperate attempt to preserve them. Change in the Middle East, however, is inevitable.